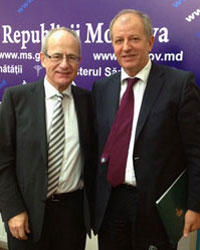 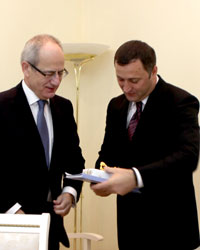 The EMCDDA Management Board adopted the MoU on 5 July at its latest meeting in Lisbon, following talks begun in October 2011. Moldova is one of the first countries of the European Neighbourhood Policy area, and in particular the Eastern Partnership, to pursue closer relations with the EMCDDA (2)(3). In 2010, the country adopted an Anti-drug national strategy (2011–18) and has participated in recent ESPAD school surveys (4). Thanks to EU financial support (5), it also set up a national drug monitoring centre in 2004, and has compiled a drug Country overview, available on the EMCDDA website (6).

Signed for an initial period of five years, the new agreement establishes structured cooperation between the EMCDDA and the Moldovan competent bodies and promises to enhance the partners’ knowledge base on the drugs situation and responses to it in areas of both supply and demand. Also underlined is the importance of exchanging information on monitoring and on preventing and treating drug use.

The Moldovan National Centre for Health Management (NCHM), operating under the Ministry of Health, is named in the MoU as the country’s official Reitox national focal point (7). Under the agreement, the NCHM will cooperate with the EMCDDA to further develop its capacity for producing an accurate picture of the Moldovan drug situation, thereby contributing to a comprehensive overview of the European drugs problem.

Since the EU enlargement of May 2004, the EU and Moldova have shared a common border and, as direct neighbours, face common challenges. Among these are the fight against illegal cross-border activities, including organised crime, terrorism and drug trafficking. A joint work programme, to be agreed between the two parties, will set out priorities. Within their respective legal frameworks, the partners will invite each other to attend meetings on subjects of mutual interest, while the EMCDDA will facilitate training and capacity-building.

Commenting on the MoU, Wolfgang Götz said: ‘Today’s accord lays the foundation for a new working relationship between the EMCDDA and its Moldovan counterparts and is an important step towards building an evidence base on the Moldovan drug situation in the European context. This agreement will allow Moldovan policymakers and professionals to benefit from the EMCDDA knowledge base when tailoring their responses to the drugs problem. We look forward with enthusiasm to working with our Moldovan partners on the broad range of issues which characterise our drug problems today’.

(1) Full text of the Memorandum of Understanding (Moldovan translation).

(5) Belarus, Ukraine and Moldova Anti-Drugs (BUMAD) programme, co-funded by the EU and UNDP.

Register here to receive our newsletter